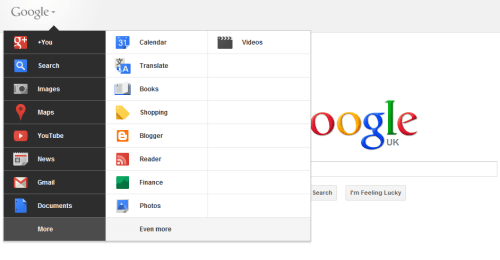 You might have started to see a new minimalist Google homepage that’s in Beta and will soon be unleashed to all.

The old school (be be fair it has only been around for a few months) black bar across the top of the Google homepage is being replaced with a grey Google logo in the upper left corner. When clicked this logo unfolds in a drop-down menu, which lists seven of its products including Google+, Gmail and YouTube. A further eight products are then offered for visitors that click through on the ‘More’ tab.

This change is clearly aimed at giving more prominence to Google+ (which recent stats have shown is doing rather well in terms of adoption) and could be seen as a way of driving more people through the Search bar as other properties such as Images, Videos, Maps, News and Shopping are now hidden behind another interaction. In some ways the logic could be that due to this amendment it is easier to monetise as Search puts adverts in front of you, properties such as news do not.

I do like the cleaner Google of old that is also starting to mirror the look and feel of the Chrome netbook OS.

It will be interesting to see the results of the redesign as to whether it improves revenue, adoption of Google+ and usability/ aesthetic appeal.