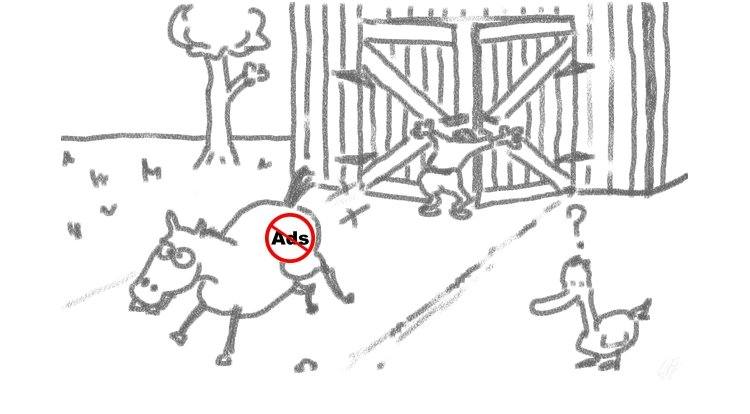 [Note: Thanks to ISBA; the Voice of British Advertisers for the stats – I will shortly be joining their bi-monthly Digital Action Group with other industry bods on topics such as the below]

The ad blocking horse has bolted.

Ad blocking is now mainstream and shows no signs of slowing. This very fact is starting to cause cracks in the very foundations of how many sites earn revenue online.

And let’s face it; it’s our fault!

We, the advertising industry, create crappy banner adverts that are either as dull as dish water, not relevant or chase consumers around for months pedaling a new car the poor sod bought months prior. Not only that but these very ads cause pages to load more slowly, consume more data (a particular problem on mobile) and cause the paranoid to become even more paranoid by virtue of the fact they are being pedaled bondage gear = how do they know I like bondage gear!?!?!?!?

Apple were the first mainstream company to hold the hands of the above disenfranchised individuals with their ad blocking technology and now we are looking at circa 18% of British UK adults using ad blocking software. What’s particularly worrying is that the ‘new’ generation, Millennials, are some of the ‘worst’ perpetrators (18-24 tech savvy males = 34% claim to ad block)

So what happens next?

Well as advertisers we firstly need to stop spamming people with terrible ads and start to add value to people’s lives online with hyper relevant and/or engaging ads.

I believe taking the ad blocking companies to court (as is happening at present e.g. in Germany) is folly. The advertising industry will not win by going down that route. Rather than the Stick perhaps a Carrot could work with some consumers e.g. explaining the value exchange as Wikipedia does.

Instead some advertisers will simply move on to other forms of advertising e.g. native / content marketing and in app.

…Whilst most others will go down the easy route of banning access to their sites for those using ad blockers (ITV, Channel 4, Forbes, etc.) or start to install paid subscriptions/ paywalls or micro payments (the obvious paywalls being the FT and The Times with GQ trialling micro payments)

The next year will be key to the long term survival of advertising techniques such as banner ads hence let’s see how this mess unfolds!