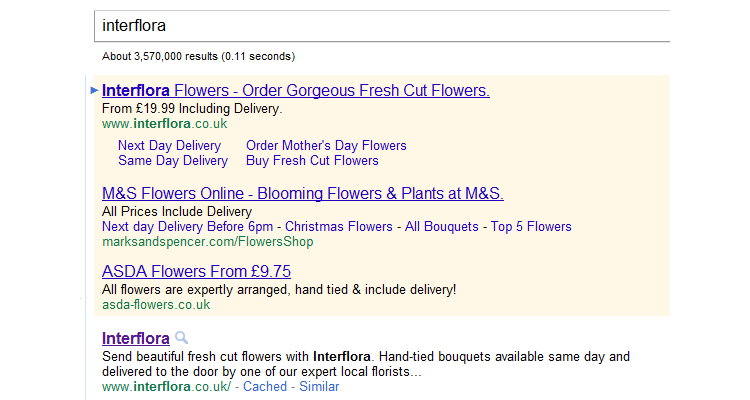 Essentially M&S were bidding on Google Adwords for terms such as “Interflora”, presenting an ad for their own flower + gift service and sending the consumer to the M&S site.

…So the UK High Court judge on Tuesday ruled that M&S’ use of the Interflora trademark in a Google Ad to advertise its M&S Flowers site amounted to trademark infringement and said: “The M&S advertisements, which are the subject of Interflora’s claim, did not enable reasonably well-informed and reasonably attentive users to ascertain whether the service referred to the advertisement originated from the proprietor of the trade mark(M&S), or an undertaking economically linked to the trade mark owner or originating from a third party.”

The headline readers of this ruling will believe that you can no longer bid on competitor brand terms.

Well they would be wrong.

Brand Conclusion: The judgment will make companies sit back and think more before targeting the competition and ensure there is no way consumers could think they are one and the same company/ affiliated. It will also stop some dodgy affiliate PPC practices where affiliates are using some underhand brand bidding tactics where the intent is to absolutely pass your site of as the brand bidded on.

In essence I believe that brand bidding activity will remain largely unchanged (though its early days and the ramifications of the ruling have not yet been felt).

Google Result: I’m not sure Google will do anything with this ruling and unless forced by the High Court (which it has not been in this ruling) will continue with the status quo. Brands will be left to fight it out in the High Court in future, perceived, trademark ‘abuse’ cases.