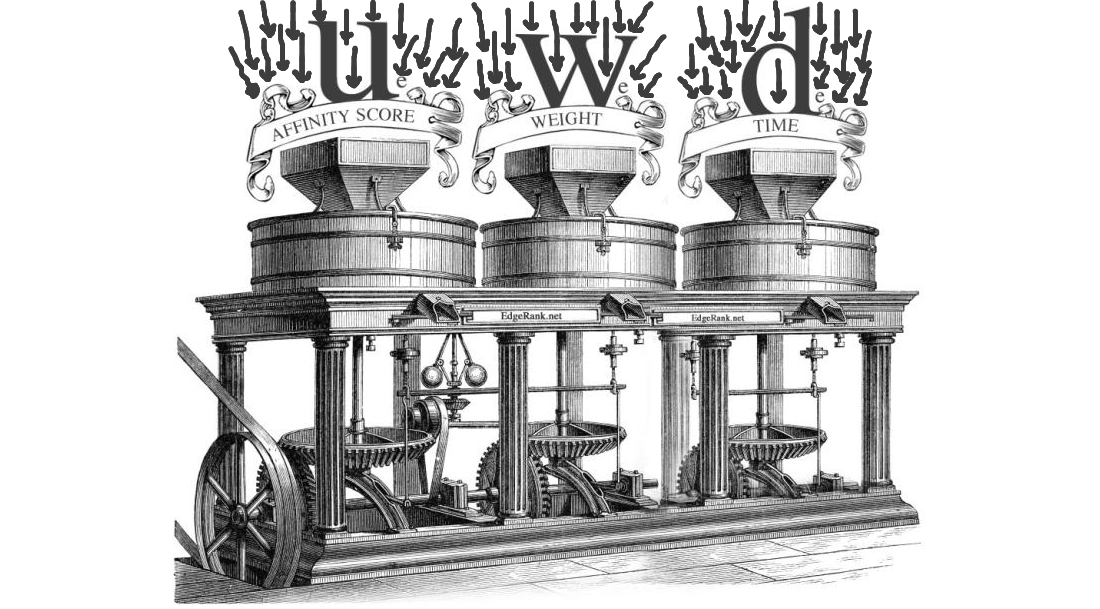 References are numerous for the below post however particular credit should be given to Marketing Land, Gigaom and Search Engine Watch

…hence I was super interested last week when Facebook stated EdgeRank was no more and there were many more factors that influenced their news feed algorithm other than the EdgeRank stalwarts of Affinity Score, Edge weight and Time decay.

Lars Backstrom, Engineering Manager for News Feed Ranking at Facebook, stated there are now circa “100,000 individual weights in the model that produces News Feed.”

Backstrom went on to state “The easiest analogy is to search engines and how they rank web pages, it’s like comparing the Google of today with Alta Vista. Both Google and Bing have a lot of new signals, like personalization, that they use. It’s more sophisticated than the early days of search, when the words on a page were the most important thing.”

However whilst EdgeRank has evolved “Facebook’s high-level goal in all of this is to show content to users that they find interesting, so that they will keep coming back to the site.”

I disagree with Backstrom when he stated that whilst the original EdgeRank elements of Affinity, Weight & Time Decay are still factors in the Facebook News Feed ranking “other things are equally important”.

… I bet Affinity, Weight & Time Decay are still the key tenets of the news feed algorithm but have been bolstered and improved in areas such as…..

Multiple Weight levels are now active within the Affinity parameter sub set so Facebook can much better categorise Affinity outside of personal interactions and into sub group (kind of like a MVT test) global interactions.

The above will be further tailored if you have bothered to label someone as being a “close friend” or “acquaintance” and with liked Pages, you can choose to “Get notifications” or “Receive updates” thus further feeding the news feed behemoth algorithm’s ability to improve news serving.

Post type will now be further improved as if you are a person who particularly responds to videos, photos, posts with links, etc then this will feed the new algorithm serving as well; and not only on a ‘global all your friend/ advertising’ level but also that type of update on a per friend basis as well.

Decay will be an interesting one as Facebook has already been fiddling in this area X 2 (‘story bumping’ gives unseen posts a second chance if they are still receiving interaction and ‘last actor’ tracks a user’s most recent 50 interactions and gives these increased recency interactions more weight on what you are to see going forward). A further development would be if a user has recently hidden a post then recent hides will likely play more of a part in whether you see further posts from that individual for the foreseeable (note: no idea at this stage how to define foreseeable)

Ads will now play more of a part in the news feed (but not vice versa) as if you have interacted with an ad then why not let that edge sway whether you see further updates from that advertiser in your news feed.

Brilliantly (an obvious idea yet still amazing) the news feed algorithm also considers tinterweb speed connection and the device being used when deciding what content you see as certain content performs better that others when these factors are varied. E.g. slow internet connection = more text updates.

So what’s this new super duper algorithm called I hear you ask?!

When I meet Facebook’s lovely people (I genuinely mean that) they never talk about EdgeRank so to be fair it’s just us stupid digital marketing folk who have become obsessed by trying to figure it out.

Facebook optimisation largely remains the same e.g. 7 Facebook advertising tips in that you need to give people news they want to interact with and you will be fine.